Recognized refugee and then what ? – Piece two

Through a series of short pieces, the GFR wishes to relate  the story of Anwar, who decided to enter into hunger strike 53 days ago to protest against his treatment and living conditions since he arrived in Europe 2 years ago. With his testimony, divided in several topics, we want to bring attention to his claims, but also disclose out loud the major issues he experienced, as well as too many of recognized refugees in Greece.

Piece 2: “Greece does not protect refugees”

As many recognized refugees, Anwar denounces a total lack of protection, as well as few opportunities to work, to find accommodation while facing discrimination, left wondering what does international protection mean if it does not offer the possibility of living a peaceful and normal life?

“I haven’t found effective protection in this country, I haven’t found durable and sustainable solution in this country, I cannot settle in this country, I have been looted in Europe rather than finding refuge there. The Greek society just say ‘you stay here’ but they are not letting anybody integrate, there is no possible way for anyone in my situation to integrate in this country. Get a proper and decent job, earn some money, be in progress, be a productive person and be happy you know; we just suffer. So, simply, I did not seek refuge to pay and suffer, right now I am just paying and suffering, that’s all, nothing else. So I cannot do this. For instance, you know, before going to Sweden, I was living all on my own expenses such as livelihood, rent, bills, etc. So I spent a lot of money without earning any and after the deportation I asked to be housed at least until I could find a source of income. I asked UNHCR, Asylum office, Caritas and Praksis. Nobody cared. They just told me to go and look into newspapers, and find a place by myself. How did I find a place? Even by having all the legal papers here it was so difficult to do that. I called like 30 real estate agencies to find an apartment to rent, some of them just wanted like two years of payment in advance, what is this, honestly, what the hell? Some of them were immediately asking ‘Where are you from??’ So, I had to let them know that I was from ‘Middle East – Kurdish’ – ‘Sorry we don’t have a place here’. Even if they had, still they would have said ‘We don’t have’. I was telling them I have a legal status here, I have all the papers, documents, but they say ‘no you don’t have a job’, you cannot find a job, you cannot make money, you cannot pay your rent, so you cannot have a place to rent. Practically all the evidences suggest that they were right. I found a place with so many difficulties.

There is really no job, economy is down, unemployment rate is catastrophic and there is no sign of improvement. Even if some miracles happen and we see companies hiring people, still as a refugee I would be at the end of the queue, unfortunately it’s the reality of refugee life in this country, discriminations are happening routinely and almost by everyone. I submitted my resume to many companies, Civil Engineering and construction companies and many others too. But nobody replied. So, if you don’t make money, if you have no protection of any kind, there would be no way to assure your safety, stability and your survival. All I have now is some pieces of worthless papers.

We are basically deprived of everything, no one will have a chance of survival in such harsh environment, it’s exactly like being trapped in merciless swamp, perhaps like taking a tree to the desert and expect it to not only to survive, but also grow and give you fruit. No. It’s impossible. Because there are no favorable conditions. From what I can see, the purposes of all these atrocities happening to the refugees are exploitation, enslaving them as cheap labor forces with the aim of easing their own financial problems or pushing them out of the country and Europe as a whole. I have my own problems, every genuine refugee does. We need a place to give us hope, real and equal opportunities, love and respect. They must stop exploiting refugees. They need to change the way they look at refugees and their mindset about us. Because if not, that would be the greatest barrier for refugees to integrate into the host society. Because that sense of distrust, injustice and lack of confidence not only will not disappear, but it just grows bigger and bigger. Maybe those in charge of setting out Refugees and Immigration Policies instead of complaining about parallel and no go zone societies should give deeper thought about why this kind of social behavior is actually taking place.

Unfortunately, there is absolutely no sense of respect and responsibility toward refugees in this country. “In Sweden, to learn about the status of my asylum application, I wrote to one of the migration officers, do you know how long it took me to get a reply from them? Less than 2 hours. How do I call this? I called it respect and responsiveness. Respect toward other fellow human beings who sought to find refuge in your country. It’s called respect regardless of what your response would be to that appeal, because then instead of waiting in uncertainty for God knows how long and losing time, I would spend my time and energy in thinking about what my other options would be, about what to do to get out of this constant nightmare. But here there is absolutely no respect for refugees, this is how they look at us. They are not giving a shit about our life, our future and our suffering. They delayed replies to all of my appeals for almost one and half a year. Why? Asylum office, Directorate of Migration Policies, Interior Minister and at the top of them the United Nations Refugee Agency (UNHCR). And if I go to their office, all they do is to call the police! Calling the police for what! To do what?

Greek police keeping me in detentions for hours and hours, telling me not to seek help in front of  United Nations Refugee Agency or telling me ‘go kill yourself’. Basically, in cooperation with UNHCR and perhaps other Greek authorities, they are trying to create a criminal case out of this situation rather than paying attention to my actual needs. Which is getting the hell out of this country. I simply made a mistake seeking refuge in Europe. Just let me go.

Smugglers are actively continuing doing their business in Athens and all over the Europe. But police, instead of going after them, is after me! Why? Is it because I want a legal way for a place of refuge? Or is it because having a legal way for refugees would damage human trafficking businesses which are now backed up by their governments? Exploiting refugees and sucking the blood out of us.”

Despair is manifest in the words Anwar is using. Suffering is a constant feature of his life today.

“Since my deportation, basically I am in the street, if I didn’t have some money, with me, a little hard earned money, nobody knows what could happen to me, nobody knows. Many people died in freezing winter temperatures this year. I could have been one of them.

There is no way forward in front of us, I don’t even have access to European job market till I finish 5 years of residency in this swamp, Trash Can of Europe. Greece is not safe for refugees. Greek authorities and the United Nations Refugee Agency must admit that and recognize our needs for having the resettlement possibilities to leave this country. They don’t own people and they must stop gambling with other people’s lives. I am now a refugee for more than 12 years now, over two of which being in this Europe’s swamp. Due to time and geographical restrictions, I can’t even benefit from Europe’s nonfunctioning relocation programs which is currently taking place from Greece and Italy.

’Many, many horrifying stories are happening right in front of our eyes, yet all we see is that NGOs and in some cases governmental institutions and on top of them the United Nations Refugee Agency is just making fame and profit out of human suffering and continue to do their ugly businesses with the same mindset that belongs to centuries ago, to turn blind eyes to all our sufferings. If there was a real help on the ground then why a refugee like me should still suffer for so long? All that refugees need is to be given a legal pathway, a safe passage to find a place of refuge. Why this is found to be so difficult to be offered to us? A safe passage to a place of refuge which I would always gladly even pay for it, yet it’s not available to us.

Introducing practical solutions like giving Nansen passport for genuine refugees to let them safely arrive in asylum and resettlement countries not only target all smuggling business, but also less people would die taking dangerous risks and also less would suffer from the aftermath of all these traumas.”

And, as it is too often reported, police brutality still remains a reality for refugees and asylum seekers today.

“I don’t want to be in police custody. During the first three days of this hunger strike, UNHCR and some other people from this building called the police for so many occasions. Police took me to the police station, kept me captive for so many hours, they destroyed my tent here, now I am using these woods to make it look like a shelter. I was jailed like for 2-3 hours, one night and etc. For what? For what honestly? Police tells me “take your tent and go to park, don’t go to OHE”. OHE is the term they use for UNHCR. They say ‘Go back to your country’. Stupid police: I have this refugee status on his desk and he tells me ‘go back to your country’. You know… Or telling me to go to kill myself… exactly like this, ‘Go kill yourself’… Police is supposed to protect innocent people, but it seems like they do not know what police is, what police is for.

When it comes to refugees these are Europe’s policies. Policies of shame which, adopted not only by Europe as a whole, but even the United Nations Refugee Agency, with the missions and agendas that only extended suffering of refugees. Accepting that people suffer, so that others are deterred. Clear attempts to harm refugees, inflict wounds, irreparable and lasting damages. Policies of shame which cost real lives, yet they find comfort in their lies as if it was so much safer for them.” 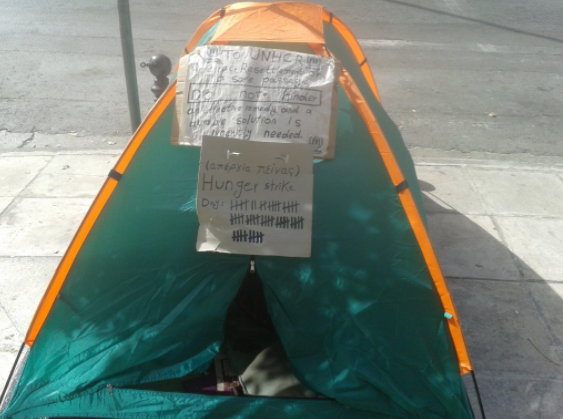