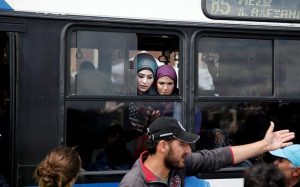 While European Union countries shut their doors to migrants – Italy and Malta last week refused to allow a rescue ship carrying more than 600 migrants to dock at their ports – Greek authorities are reopening unused camps and facilities across the mainland to accommodate the swelling number of asylum seekers.

Following a series of meetings last week, sources told Kathimerini, the Ministry for Migration Policy decided to reopen four camps, first set up at the peak of the refugee crisis in 2015, raising the total number of operational centers to 25.

More specifically, tents have been set up again at the Malakasa camp, north of Athens, to house 300 people. The Vagiochori camp near Thessaloniki, in northern Greece, is also expected to open in the coming days, providing accommodation for 400 individuals. The facility at Elefsina, west of the capital, has been hosting 250 refugees since late April, while another 350 migrants and refugees were transferred to the reception center at Oinofyta, north of Attica.

A drop in the migrant population at the Skaramangas refugee center, meanwhile, was reversed after September last year, with the current number estimated at more than 2,000.

An average 75 migrants land daily on Greece’s Aegean islands. A total of 12,065 people had entered the country until June 11 this year.