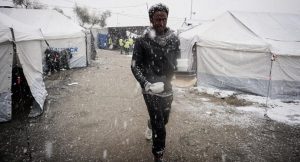 The Greek government, with the support of European Union leaders, should act now before the onset of winter to end Greece’s “containment policy,” 12 human rights and humanitarian organizations said in a campaign that began today.

The groups began a countdown to the official start of winter, December 21, 2017. They said that Prime Minister Alexis Tsipras, with the support of EU leaders, should immediately transfer people to improved conditions on the mainland and take concrete measures by December 21 so that no asylum seekers are left out in the cold.

As of November 30, the hotspots on Lesbos, Chios, Samos, Leros, and Kos are almost 7,200 over capacity: 12,744 people in facilities with a capacity of just 5,576. Thousands, including single women, female heads of households, and very young children, live in summer tents, essentially sleeping on the ground, exposed to the cold, damp, and rain as the weather worsens. Some women are forced to share tents and containers with unrelated men, putting their privacy and safety at risk. There is lack of access to clean water, sanitation facilities and health services.

This will be the second winter asylum seekers have had to spend in unsuitable facilities on the islands since the EU-Turkey Deal went into effect in March 2016. Last winter, three men died on Lesbos in the six days between January 24 and 30. Although there is still no official statement on the cause of these deaths, they have been attributed to carbon monoxide poisoning from makeshift heating devices that refugees have been using to warm their freezing tents. In late 2016, a blast likely caused by a cooking gas container killed a Kurdish woman and her young grandchild, also sleeping in a tent in Lesbos.

EU and Greek officials have referred to the EU-Turkey deal as a justification for the containment policy. The policy, put in place as part of the deal, forces asylum seekers arriving on the Greek islands to remain there until their asylum claims are decided, regardless of if there is accommodation capacity or adequate access to services. However, forcing asylum seekers to remain in conditions that violate their rights and are harmful to their well-being, health, and dignity cannot be justified, the groups said. Some who arrived on the islands in the early days of the deal have remained stuck there for 20 months.

As part of the campaign, the groups are teaming up to highlight the deplorable conditions asylum seekers trapped on the islands face; to call on European citizens to get involved; and to monitor and update the public on the response of the Greek government and EU leaders.

For more information on the digital campaign, please visit:
https://www.hrw.org/opentheislands