Deprived of rights. Statement on the new Greek bill.

This is a statement on this month’s decision of the Greek parliament and its direct impact on refugees, as well as on the link between the legal situation and racism by citizens. We have been to Chios last week to observe the outcome for those captured and detained there.
The New Bill
The Greek Forum of Refugees acknowledges some positive provisions in the bill, such as the possibility for Asylum Seeker whose asylum applications have been waiting response for more than five years the possibility of humanitarian protection status, the transposition of the EU directive 2013/32 and the implementation of a determination process for stateless people. Each of these measures are major steps. Yet, we can hardly truly acknowledge these improvements, as they are overshadowed by the de-facto implementation of the EU-Turkey agreement in the bill. The new law – in theory – allows a fast track procedure for asylum in Greece. The procedure is supposed to last no more than 14 days in total, including the opportunity to appeal if the application is rejected in the first place. It also gives more power to the police in the asylum procedure and all hotspots will be restructured to be pre-removal detention centers. Although the law theoretically grants a suspension of deportation for the time an asylum application is being considered, we can see from the past days that this is not granted to the new arrivals, who are being held in detention on the islands. 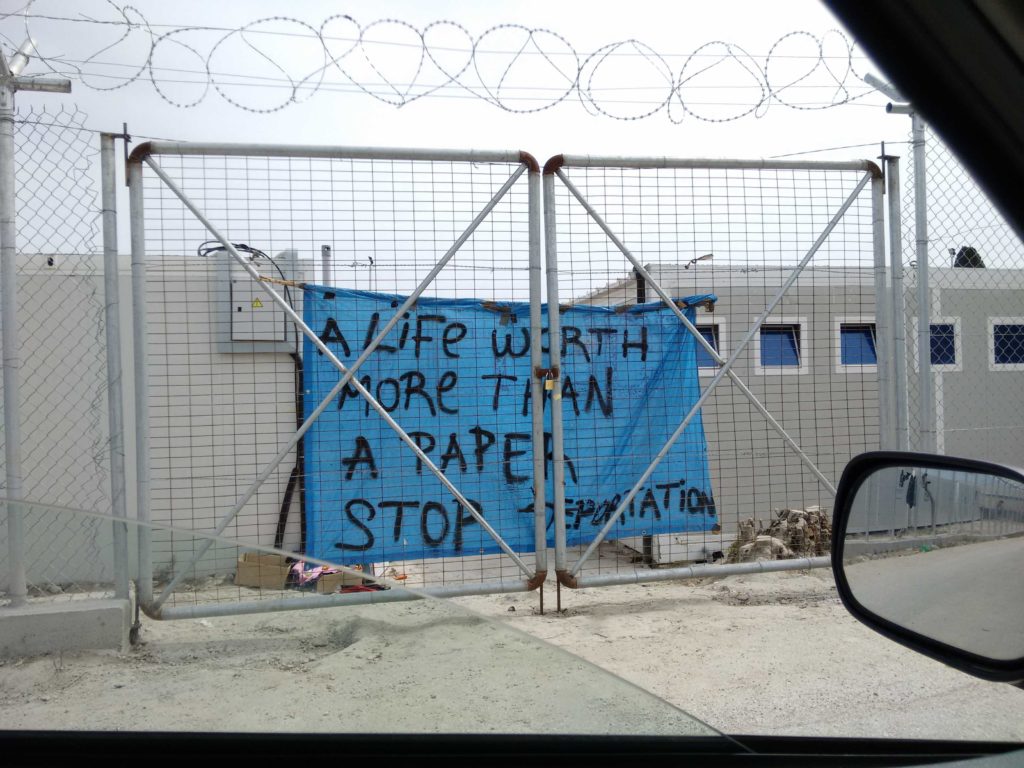 Reality On The Islands
What we learn from reality, is that the EU and Greece have created a space void of rights. Detainees on Greek islands are being held away from the public, checks or arrest by local police. We have witnessed this firsthand. In the prison camp in Vial, people are kept with no information. The application process started on April 2nd – two days before the first deportation took place. How is this possibly enough time to consider each case individually, as is agreed in the Geneva Refugee Convention?
Early on Monday, April 4th, busses brought the imprisoned refugees to the port, where they were held in custody until they were told to get on a vessel. A young Iraqi man informed us that he had been at a protest camp at the port and accidentally entered the group awaiting deportation. Only after a long and persistent discussion with both Frontex officers and riot police, the young man was able to go back to his wife and child at the port.
This, as well as other testimonies from inside Vial prove the chaotic process of picking people for deportation, showing how arbitrarily the police and Frontex decide who will be deported to Turkey, a decision that has detrimental consequences for those unfortunate enough to be chosen. As the director of the UNHCR’s European Office has stated, 13 people who had actually applied for asylum in Greece, might have been on the vessel. From our conversations with refugees, this is probable. 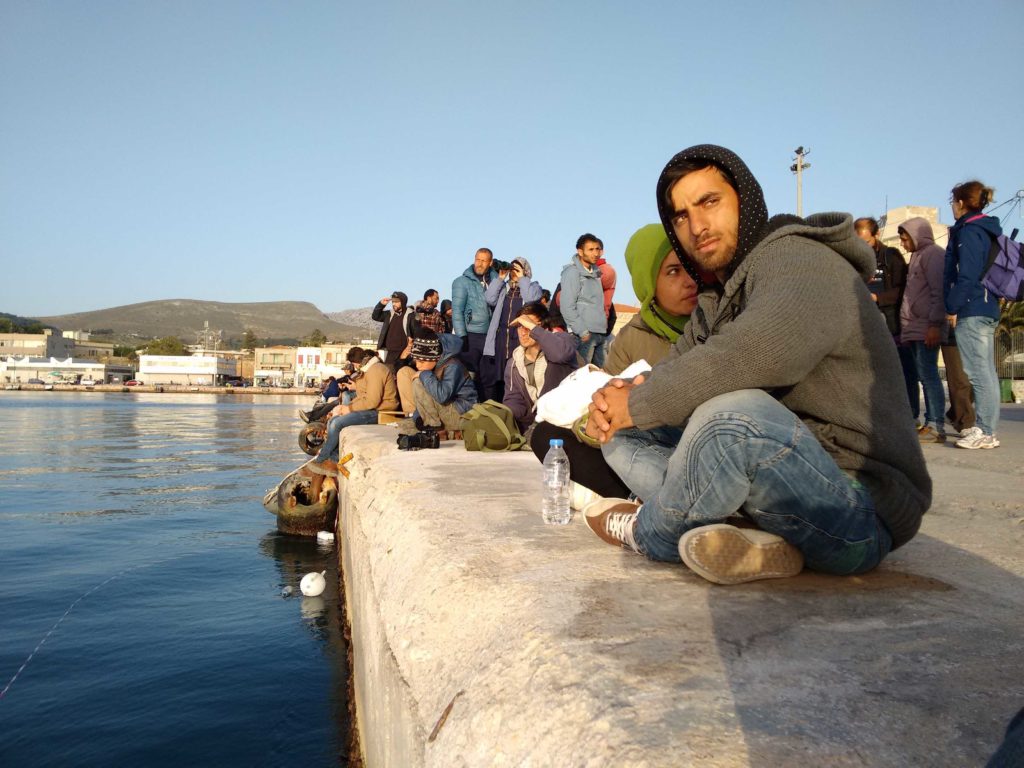 Protest At Chios Port
After fights in the camp between different groups, an estimated number of 500 refugees broke out of Vial and took a march to the port, where they occupied the pier. Although no ferry has come here, people continued to protest. „Athina!“, „No Turkey!“, „Germany!“, „Azadi!“ were among the most common chants during the frequent protest gatherings. People do not want to apply for asylum in Greece, yet refuse to be taken back to Turkey. Their protest was strong – they know what they want. „I don’t want water or clothes“, a young Syrian woman said. „I want to be able to go where I want. And we cannot go back to Turkey, it’s impossible“. And also inside the camp, protests are on the rise. Apart from deep desperation and the feeling of humiliation, the inmates also expressed how much they know that it is unlawful to treat them like this.
„This is wrong, we know it. We are treated like prisoners, although we haven’t done anything wrong.“, a young father of two children tells us through the fence, as we are hastily watching for police to come and trespass us from the area. „And this piece of paper, this application, what is it worth in the end, if people will be deported anyway?“ 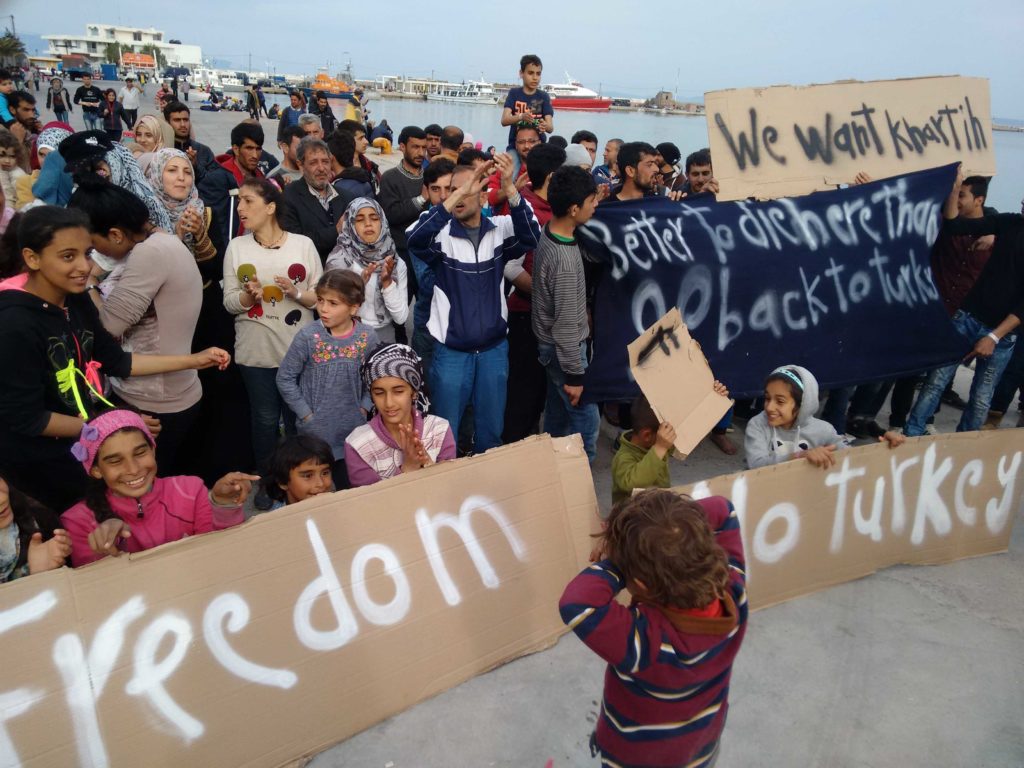 Watching the ferry leave, in speechlessness and desperation, people at the port still decided to hold up their protest. We strongly support their protest both inside and outside the prisons, we encourage refugees to know their rights and to continue demanding their freedom of movement. We condemn the agreement as well as its implication in the newly passed Greek bill.
Why the law supports racism
Now, as we have seen fascists threatening the refugees at Chios port and the reaction of the police – which was to arrest volunteers and refugees and none of the aggressors – we are astonished. The authorities did not protect the people from an aggressive and dangerous attack, but instead used the situation to justify an eviction of the refugee protest. People have been taken to a nearby camp run by the UNHCR. We wish to outline that racist attacks and protests are directly linked to the legal situation, which marks refugees as strangers, criminals and targets. There is little wonder that racists feel strong these days, when European politics are so inhumane. Both racist citizens and fascists may feel like enforcing a majority’s will. However, we will stand at the side of the refugees and do what we can do to overcome their isolation.
0
SHARES
ShareTweet
Refugees: arrests and lack of protection For A Variety of Actors. Against the Criminalization of Solidarity