HAnds on Refugees Talent and Sustainability, commonly known as “HARTS”, is an initiative of the Greek Forum of Refugees that had, from its beginning, the goal of empowering women with a refugee or migrant background. Based on the talent, abilities and the skills of the women of the group and combined with the drive of Photene Kalpakioti, the team of “HARTS” began to grow forming the heart of the Greek Forum of Refugees. The idea was conceived during a visit to Lesvos in 2016 by Photene, who found that women in temporary accommodation structures were not included in initiatives or programs aimed at strengthening and empowering the refugee population. 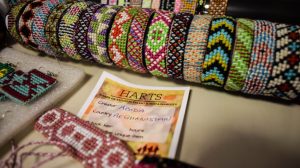 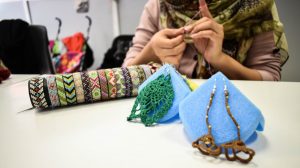 The workshop HARTS is not only where the art begins but, mainly, it is about women’s empowering time and space in which they design, train and support each other through their creations. This constitutes a private meeting between women, apart from their difficult everyday life outside the camps, where they share their stories, their experiences and skills in terms of traditional handicrafts. The HARTS initiative has also been an excellent tool for
mapping both the talents and skills of women with refugee background and their needs. Above all, however, it is a recognition of what these women can bring to us and a way to encourage them to rely on themselves, to be autonomous.

The team throughout the last years meets on a regular basis, once or twice a week, with its members sharing with each other their skills and passion, their experiences and stories, their anxieties and ambitions. The team is the body that recognizes the abilities and skills of women themselves, giving them self-confidence. The initiative offers professional support, training tools, seminars for the development of skills and, at the same time, contributes to
the promotion of their work in the market. 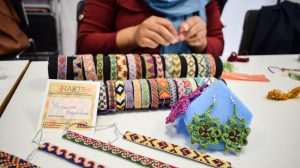 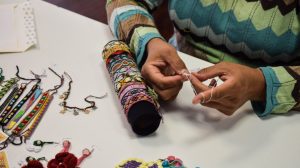 Learn more about our Cause