9/12/2017: March for the right to freedom and to unite with family We can’t take the plane or ship, but we can take to the streets 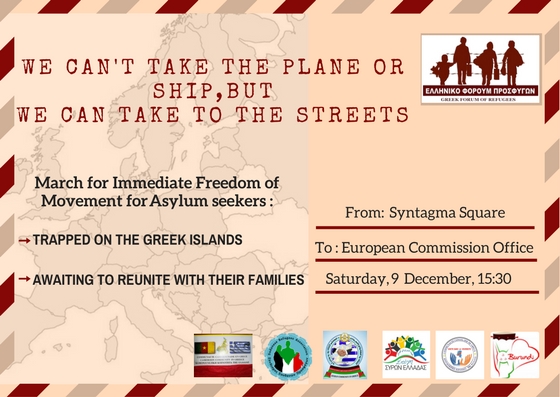 March for the right to freedom and to unite with family

We can’t take the plane or ship, but we can take to the streets

for Freedom and Human Rights

to End Trapping Asylum Seekers on the Islands,

to Reunite Families within Europe

We came to Greece to be safe

None of us is safe trapped on the greek islands.

None of us is safe being blocked far away from our families.

Ports and airports have become places forbidden to us.

Our dignity and rights are being denied to us.

We can no longer accept the situation that has led to tragic consequences with people losing their lives, other compelled to go on hunger strikes or suicide attempts.

to take up on their responsibilities

Freedom and Human Rights for all Refugees

End Trapping on the Islands

Join us on Saturday 9th December 2017, at 15.30 at Syntagma Square. The March will head towards the representation of the European Commission in Greece (2 Vas. Sofias, Athens).

0
SHARES
ShareTweet
Call For Cultural Mediators Farsi & Arabic Manifestation 9/12/2017 – We can’t take the plane or ship, but we can take to the streets